Let's Unfold the Map of the Future in Hokuriku

Students spend a week with high school and university students from Japan and abroad.

KSS provides students with an opportunity to discover a new side of themselves and think about their future.

This summer, why don’t you think about yourself and your future with your best friends?

THE REASON FOR HOSTING THE PROGRAM IN KOMATSU CITY

Komatsu City has a rich natural environment including Lake Kiba as well as a stone and gemstone culture designated as a Japanese heritage site. Throughout its long history nature, tradition, and industry have been preserved and developed to this day including kabuki, traditional handicrafts, and industries such as Komatsu Ltd.

In addition, Komatsu City is actively promoting international exchange beyond national borders and has developed exchange programs with various cities around the world, so it is a place where people are able understand different cultures. 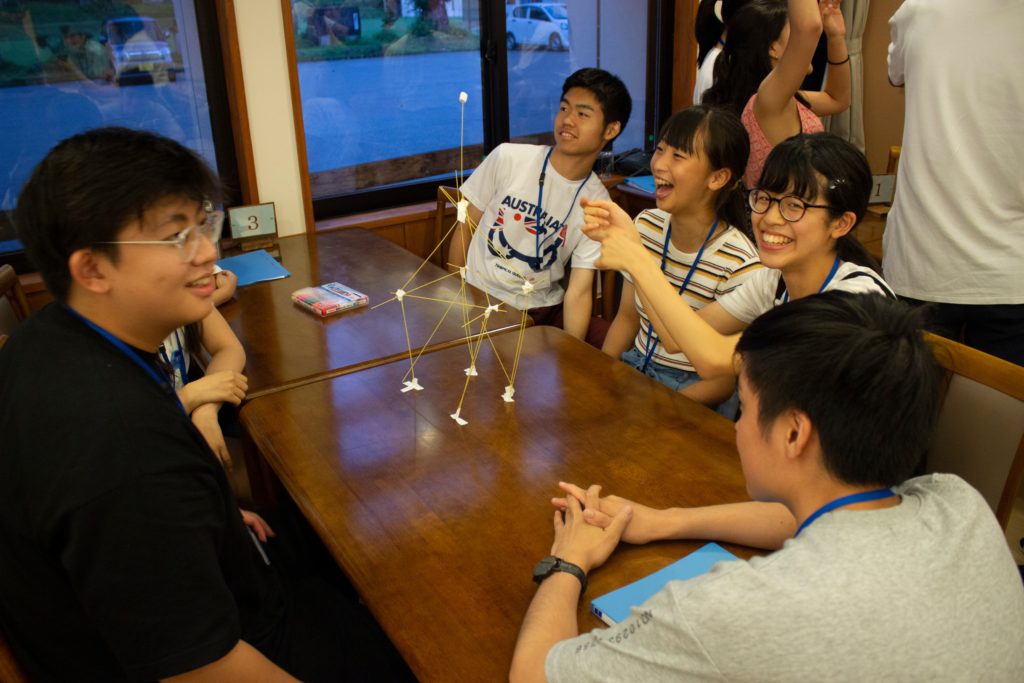 At KSS, we provide input and output through a variety of programs to help students deepen their own thinking. Japanese high schoolers have the opportunity to take liberal arts classes in English from overseas university students. There is a forum where working adults active in various fields in Japan and around the world are invited as lecturers to talk about their lives up until now and share their thoughts.

Komatsu cultural experiences such as applying Kabuki makeup and painting on Kutani ware provide participants with an opportunity to meet local people. The SDGs workshop will be held in collaboration with the United Nations University Institute for Advanced Studies on Sustainability, Ishikawa-Kanazawa Operating Unit (UNU-IAS-OUIK). There will be many other programs created to maximize your learning and self-awareness.

Collaboration with the local community

The Komatsu Summer School Executive Committee has been awarded the 34th annual Japan Foundation Global Citizenship Prize for 2018. We would like to express our sincere gratitude to the many companies, organizations, and individuals who have continued to support us since our establishment.

We would like to thank all of them for endorsing our principles and supporting our organization. 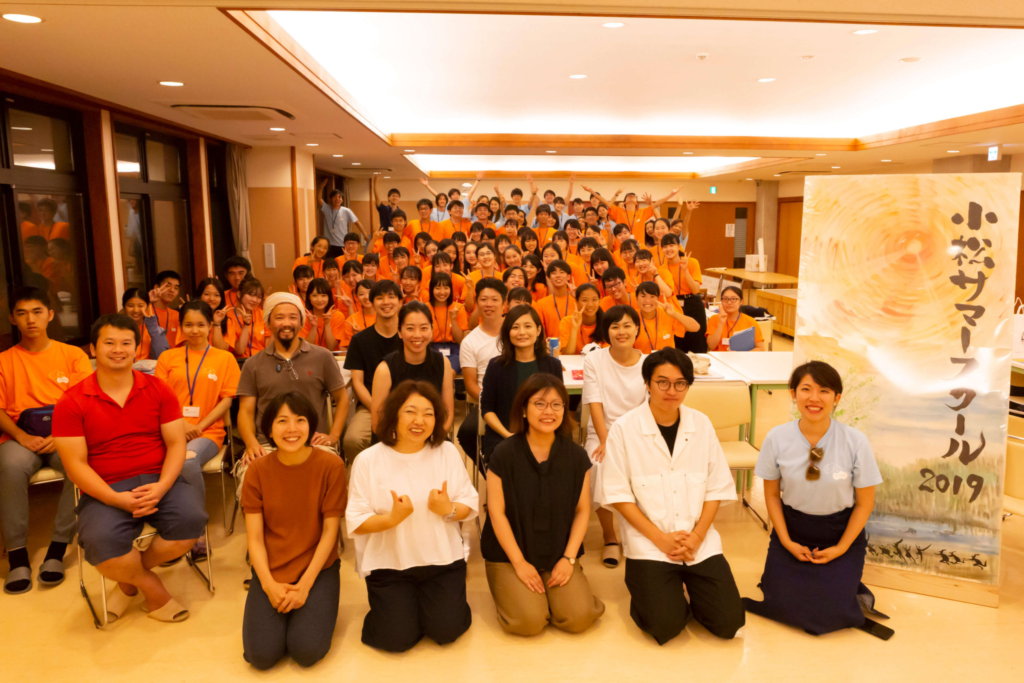 Small group classes focus on "dialogue" to foster critical thinking. Together with an overseas and Japanese university student pair, academic classes are taught in English.

Go to Komatsu and experience the long-standing traditional culture with all your five senses. It is not just passive classroom learning that is common, but it is a time when you get to learn by freely using your entire body.

You will be able to draw a future you have not yet seen by interacting with adults you normally would not meet. We invite people who are active in various fields to give lectures.

During the duration of the summer school, you will spend time in a family-like group called a "house" which consists of approximately five high school students, one house leader (HL), one seminar leader (SL), and several other Executive Committee members (EC).

The Voices of Past Participants

Participating in KSS2020 online and seeing all the people I met at KSS has given me the confidence to take on any challenge. KSS encourages you to take on challenges. Let's jump on things we normally wouldn't do! 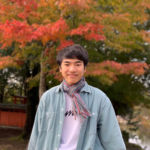 I was invited by a friend and entered not taking it seriously but in reality, after participating, I lost my fear of long English sentences and thoughts about my future became more concrete. 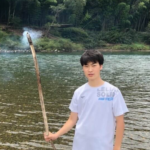 The English seminar may seem like a huge hurdle but it's a great opportunity to grow and change, so please join! 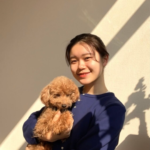 ”What is the meaning of KSS, you ask?"

Greetings From the Director, Chair, and Vice-Chair

Know Others and Know Yourself

My name is Menghe Xu and I serve as the representative for the Komatsu Summer School Executive Committee.

Since 2014, Komatsu Summer School has been providing high school participants with the opportunity to “know others and know themselves.”

When I was 18 years old, I left China and came to Japan to study abroad. Because I had grown up in a closed community, I believed that there was a “right” answer to my path so I tried my best to follow the course that was laid out for me. Therefore, when I came to Japan and was put in a free environment called “college” and saw so many options, I became confused about how I should live.

That is when I came across the Komatsu Summer School. In 2014, the first year of the program, I participated as a university staff member and met university students and high school school students from diverse backgrounds as well as working adults who are active and passionate in different fields. This was the first time I began to think, “What do I want to do?”, “How do I want to use my strengths to contribute to the world?”  and had a lively learning and living experience.

Later, as I met various people, I realized that there were many people who were bound by the “right” answers to their path, just as I had been. As a program that is in a rural area of Japan, I want to create a place where high school students can have encounters and opportunities, and let them them know that “life has many choices” and “it is fun to live on your own terms.” I also dream that the people who were impacted by Komatsu Summer School form a large circle and have a positive influence on the world.

This year marks the seventh year of the Komatsu Summer School which has been supported by many people in Japan and abroad. From the benefits we have received from you, we will do our best in supporting the young people who will create the future and contribute to society.

We would like to ask for your continued support into the future. 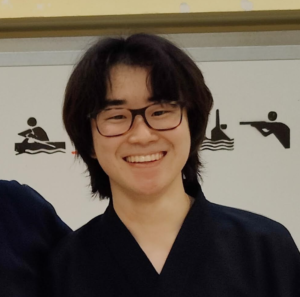 Hi, this is Taichi Uno, the Chairman of Komatsu Summer School.

At Komatsu Summer School, a variety of programs have been developed based on our faith in liberal arts. Liberal arts cultivates human resources by acquiring knowledge in various fields and solving unanswerable questions through a multifaceted perspective. Generally speaking, “various fields” refers to disciplines such as mathematics, linguistics, and psychology. As people say, however, is “extra knowledge” useless?  For example, knowing the birthdays of all the members of an underground idol group or knowing 100 digits of pi. Even if they do not directly lead to problem-solving skills, they bring out the depth and interesting qualities of a person and gradually, they become the driving force that brings people together. In a true sense of the word, liberal arts embraces a “variety” of knowledge that is important.

Next, a characteristic of Komatsu Summer School is “cultural exchange.” When people hear the term, “cultural exchange,” it is easy to get caught up in the idea that it is only about talking with foreigners and experiencing foreign cultures. Of course, that is very important, and seminar leaders of various races, countries, and regions gather here. But what about other Japanese university students and fellow high school students? In Japan, within the same prefecture and even the same apartment complex, different cultures exist. It is important for us to respect and learn from one another.

Komatsu Summer School is an opportunity for you to experience these two points. Let us have the most exciting and educational summer together! 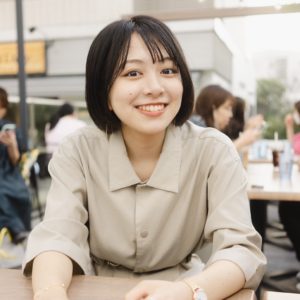 Hi! This is Sakura Goto, the Vice-Chairman of Komatsu Summer School.

We all have questions that we have asked ourselves at least once in our lives. High school students are at a delicate stage where they are questioning their lives, themselves, and thinking about the future. What kind of experience do you need this summer? What can Komatsu Summer School (KSS) provide?

KSS is in Komatsu City, a place rich in culture, natural attractions, and is a bilingual summer camp that is centered around liberal arts. High school students from all around Japan spend one week experiencing the culture in Ishikawa Prefecture, engaging in cross-cultural exchange using English, and coming in contact with a wide range of academic fields while at the same time discussing the future together. This short but intense time is an opportunity for high schools students to “understand others, understand the world, and face themselves.”

In a space where people from various backgrounds with different values gather and live together, you will most likely encounter new thoughts that will break your normal way of thinking and it will become quite an extraordinary encounter. There, you should be able to see, hear, and feel stimuli not normally found in your everyday life, confront your discomfort earnestly, and find your identity through differences with others.

This deeper understanding of yourself will later lead to “self-confidence.” Self-confidence is the belief in one’s potential and value. Once the summer school is over, you will be able to see the world a little differently, take action with a daring heart, and use these abilities in your daily life. As you are connecting with others in that way, it is an experience that builds self-confidence so the answer to the first question about life is scattered everywhere.

This summer, we invite you to face questions about life and yourself alongside warm college students and worried high school students.

※Listed in no particular order, honorifics are omitted 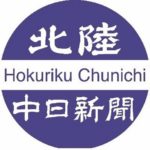